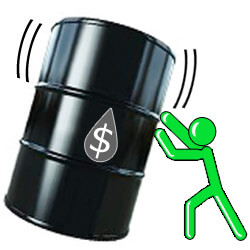 2.24.11: In the markets, as in life, there are no guarantees but everyone is entitled to their opinion. Here’s my opinion on the financial markets today.

The S&P is trying to avoid a third straight decline today as disruptions in Libyan oil production and fears of spillover to other Middle East and North African oil producers continue to put upward pressure on crude prices.  A drop in weekly jobless claims helped futures pare early losses.  Global markets sold off overnight on heightened geopolitical risk, although China’s Shangai Composite bucked the trend.  Commodities are mixed, with copper and gold higher and natural gas and most key agricultural commodities lower.  Earnings news is of secondary concern, although the latest batch of results (including two prominent retailers and an automotive manufacturer) are being mostly well-received.

Looking back at Wednesday, U.S. stocks further extended Tuesday’s declines as crude soared amid ongoing violence in Libya.  A major technology provider added “fuel to the fire” with a nearly 10% decline on disappointing earnings.  Stock performance-wise, Energy was “on an island” yesterday with a nearly 2% advance while the rest of the S&P sectors all finished in the red.  Consumer Staples and Utilities held up well, as did Financials on resilience among the bank group.

Saudi Arabia said it is in “active talks” with European oil companies to make up the shortfall in Libyan oil production. A senior Saudi petroleum official said the kingdom is discussing with refiners on whether they need extra oil, and if so, what quality and quantity as well as timing.  Analysts have contrasted the current-day situation with 2008, when the price of crude rose to $147 a barrel and Saudi Arabia did not increase supplies, instead blaming the rise on financial speculators.  The fear then was that the Saudis lacked the spare production capacity to boost supplies, even if they had wanted to.

Once again today, domestic economic data fared better than expected. New applications for unemployment benefits declined last week by 22,000 to 391,000.  The consensus was for a drop of 5,000.  More importantly, the less volatile four-week moving average fell to a two-year low, down 16,500 to 402,000.  In other economic news, January Durable Goods rose 2.7%, following a revised 0.4% drop in December.  While the 2.7% gain was below the consensus of a 3% gain, the data was not too worrisome given the prior month revision from down 2.3%.

Will Quantitative Easing (QE2) end early? Philadelphia Fed President Plosser, a noted inflation hawk, at a speech yesterday discussed the possibility the Fed may bring QE2 to an early close should economic prospects continue to strengthen and pressure inflation higher.  The Fed’s dovish policy stance remains intact, however.  Other members, including Chairman Bernake, are focused on maintaining easy monetary policy to avoid deflation.  Fed funds futures markets have recently reduced the probability of a rate hike by the end of the year to 40%.