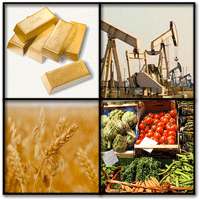 5/24/11: In the markets, as in life, there are no guarantees but everyone is entitled to their opinion. Here’s my opinion on the financial markets today.

U.S. stocks opened higher this morning after two Wall Street firms issued bullish commodities outlooks.  After getting battered yesterday on Euro zone debt concerns, market participants appear to be turning the risk dial back to the “on” position and shifting their focus elsewhere.  Overseas equity markets are mostly higher, with Europe benefiting from strength in miners as base metal prices rebound on the bullish broker outlook.  Asian markets inched higher on speculation that the China slowdown may be priced in.  Commodity gains, which are being bolstered by a weak dollar, are being led by crude, copper, silver, cotton and coffee.  U.S. crude is making another run at $100 this morning, while gold is up five dollars to $1520 and silver is about a dollar higher near $36.

Looking back at Monday, stocks and commodities fell sharply as Euro zone debt fears continued to weigh on risky assets, while renewed fears of a pronounced China slowdown pressured commodity prices.  After yesterday’s losses, the S&P 500 is down over 3% from late April highs to a fresh one-month low.  The latest market jitters were triggered by a negative Italian credit outlook, more Greek debt downgrades, and slowing PMI readings from Europe and China.  All 10 S&P sectors fell, with defensive Consumer Staples and Telecom holding up relatively well but still almost 1% lower.  Cyclical sectors lost between 0.9% and 1.5%, with Consumer Discretionary on the better side thanks to Retail’s resilience as oil fell and Tech on the bad side on selling pressure in software.  Commodities as a group sold off about 1% on the global growth concerns and strong dollar, with China-driven copper hit especially hard.