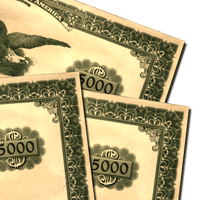 5/17/11: In the markets, as in life, there are no guarantees but everyone is entitled to their opinion. Here’s my opinion on the financial markets today.

Some relative calm overseas contributed to gains in U.S. stock futures early this morning.  However, as the open approached and market participants digested the latest earnings news from a major retailer and a prominent technology company (along with economic data on housing starts and industrial production), gains evaporated.  Some dollar strength also weighed on the open and put modest pressure on commodities.  European markets were mixed, with bank weakness being offset by some gain in miners.  Meanwhile, the Nikkei inched higher, helped by a weaker yen, while the Hang Seng moved slightly lower.  Oil prices are down again this morning, to near $97, as are key metals, while agricultural prices are higher.

Looking back at Monday, the week started off on a down note thanks to Greece headlines and tepid economic data.  More specifically, Greece requested another round of bailout funds, while the New York manufacturing survey showed more of a slowdown in activity in that region than had been anticipated.  At the sector level, disappointing results from a major home improvement retailer and weakness in Internet retailers weighed on Consumer Discretionary, while Technology was dragged down by a more than 2% drop in earnings from a major sector player.  As has been the case for much of the past several months, defensives continued to demonstrate market leadership as Utilities, Health Care and Consumer Staples all finished around unchanged despite the market declines.  Crude fell more than two dollars to near $97 and gasoline tumbled nearly 5% as fears of refining disruptions from flooding abated.  Other big commodity movers yesterday included corn and wheat, which were solidly higher, and silver, which lost more than 2%.