The election is over

No one will be complaining that the election is over . The affect it had on the markets was not dull at all. This chart shows how the market responded Tuesday night when it looked like Donald Trump would win the election. The Dow fell 976 points which is a big fall. By Wednesday morning, however, the Dow was up. We believe the Dow ended up the way it did because now the uncertainty is behind us. 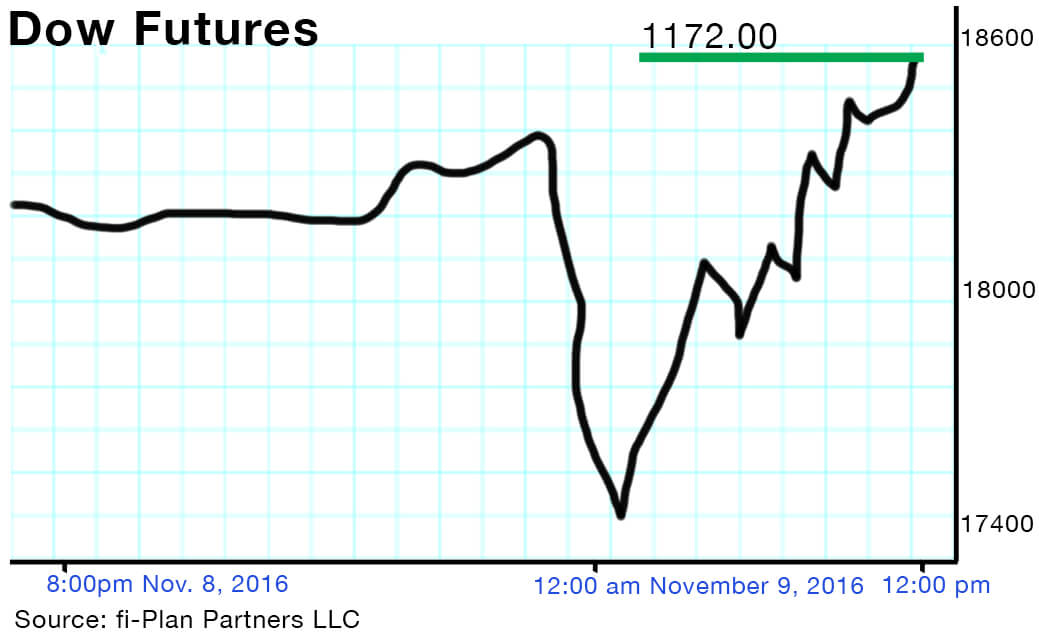 There’s a saying, “It’s never as bad as you fear or as good as you hoped.” In an eight hour period we saw panic in the markets. Then everyone relaxed and the markets rallied back. It’s interesting to note that the S&P 500 predicted the winner of the presidential election again. The markets were down three months leading in to the election which, in the past, indicated the incumbent party losing. Everyone was saying the Hillary Clinton was by far the favorite but nothing went as scripted. The market saw this coming. Now that the election is over there has been a rally in equities. The down side is a huge spike in inflation expectations. We also saw bond yields rise which usually causes their prices to fall. While equities are up, the bond market has fallen faster than expected.

We are seeing some knee jerk reactions and people over reacting. Now that the election is over we can look forward to the what the Fed will do with interest rates and what agenda the new president will have. Donald Trump has to prioritize. He has ten or more things that he says are important in the first 100 days. What is important is not what those things are, but what order he prioritizes them. The markets will price in the most optimistic portion. It will be a lot to digest.

An example of the priority affect

An example of how Donald Trump’s priorities could affect the markets is the issue of the Dodd Frank Act. This act has had major impact on the consumer mortgage market and on how corporations borrow. President-elect Trump has already stated that he would like to repeal it, or at a minimum, cut it back. This could have a big impact on the corporate and consumer credit, particularly on the regulatory side. This is just one example of how many his priorities could be market impactful.

When could the Fed raise interest rates and how much?

As investors we are very excited that the election is over. Now we can make the necessary adjustments in an effort to catch some good growth.

Don’t hesitate to contact any of us and we will keep you updated.

Fi Plan Partners is an independent investment firm in Birmingham, AL, serving clients across the nation through financial planning, wealth management and business consulting. Fi Plan Partners creates strategies in the best interest of their clients using both fee based investing and transactional investing.

The opinions voiced in this material are for general information only and are not intended to provide specific advice or recommendations for any individual. All performance referenced is historical and is no guarantee of future results. All indices are unmanaged and may not be invested into directly.

Economic forecasts set forth in this presentation may not develop as predicted.

No strategy can ensure success or protect against a loss.