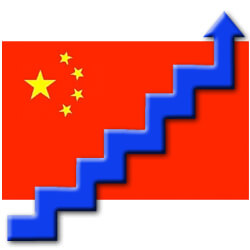 2/8/11: In the markets, as in life, there are no guarantees but everyone is entitled to their opinion. Here’s my opinion on the financial markets today.

Considerable market focus this morning is centered on China’s interest rate hike and the possibility of a sharp slowdown in that economy.  Fortunately, the continuing positive tone from U.S. earnings and mergers & acquisition activity appears to be “outweighing” the Chinese impact, leaving American stocks near unchanged.  Higher weekly retail sales despite storms in the Northeast and strong same-store sales from McDonald’s are also supporting the major averages this morning.  European stocks were off slightly in mid-day trading, while we will have to wait and see until tonight to process how Asian markets react to China’s latest rate hike.  Japan’s Nikkei rose, getting a lift from better-than-expected results from Toyota.  Crude prices are down again on Chinese growth concerns, while precious metals are up strongly.  Domestically, the most recent U.S. earnings reports are not quite as strong as recent trends.

State revenues increased 7% during the fourth quarter of 2010. The Rockefeller Institute of Local Government released a preliminary report on state revenues in Q4.  The fourth quarter increase was the strongest since the second quarter of 2006.  The increase will help address, but not fully offset, state budget deficits for the coming fiscal year.

And speaking of Treasuries, better economic growth expectations were the driver of higher yields. Inflation expectations, as measured by 10-year TIPS, increased by 0.1% and did not account for the entire 0.3% rise in intermediate Treasury yields, indicating that .2% of the yield increase was due to the swath of stronger-than-expected economic data last week.  Although inflation expectations increased over the fourth quarter of 2010, they remain just below the average level in existence prior to the start of the financial crisis.