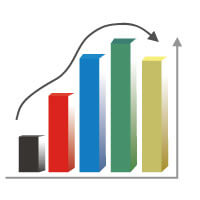 4/12/11: In the markets, as in life, there are no guarantees but everyone is entitled to their opinion. Here’s my opinion on the financial markets today.

U.S. stocks opened lower this morning, following foreign markets down after additional aftershocks and an upgraded nuclear crisis level caused concerns in Japan to intensify.  Today’s economic calendar includes weekly retail sales, which inched higher by 0.1%, import and export prices, and trade balance data, which continue to point to modest (sub-3%) GDP growth in the first quarter.  The Nikkei is down nearly 2% overnight, while primary European indexes are about 1% lower in mid-day trading overseas.

Looking back at Monday, stocks finished slightly lower on another light volume day ahead of the unofficial start of first quarter earnings season.  Besides some merger news, there was little for equity investors to react to Monday.  Investors did demonstrate a preference for defensive investments as Consumer Staples and Health Care were the only sectors in positive territory.  Commodities were lower overall after the IMF cut its U.S. and Japanese growth forecasts.  Crude’s nearly $3 drop to below $110 weighed on the Energy sector, which lost nearly 2% on the day.

1. Top Federal Reserve officials sent a clear signal that the Fed is unlikely to follow the European Central Bank in lifting interest rates anytime soon. The Fed is playing down the idea that soaring commodity prices will lead to broader U.S. inflation.  At the Economic Club of New York on Monday, Janet Yellen, the Fed’s vice chairwoman, said U.S. monetary policy “continues to be appropriate.”  Speaking in Tokyo earlier, William Dudley, president of the Federal Reserve Bank of New York, said, “We think that it’s important not to overreact to a rise in headline inflation because the increase in commodity prices is probably going to be temporary rather than permanent.”  The comments by the two influential Fed officials appeared to put to rest – at least for the next few weeks – a debate at the Fed that recently has been playing out in public.

2. White House officials have opened the door to a deal with Republicans that would allow the U.S. to increase its ability to borrow, potentially easing worries in financial markets that the country might default on its debt. Softening the administration’s earlier insistence that Congress raise the so-called debt ceiling without conditions, officials now say they won’t rule out linking increasing the borrowing cap with cuts aimed at reducing the deficit – even though they would prefer to keep those issues separate.  The shift by the White House comes at a critical point in a debate about the country’s fiscal future.  Coupling the debt ceiling with deficit reduction suggests a scenario in which some of the many deficit-reduction measures flooding Washington could become reality.

3. In its outlook for the world economy, the International Monetary Fund remained relatively upbeat despite several threats on the horizon. Global economic growth should slow to 4.5% this year and next, down from 5% in 2010, as governments “wind down” their stimulus programs.  However, surging commodity prices could pose serious obstacles in growth.  A major supply disruption that drives up oil prices to $150 a barrel could cut as much as three-quarters of a percentage point off growth rates for many nations.  The global economy will also grow unevenly, with advanced economies forecast to grow at about 2.5%, while emerging and developing economies are forecast to grow at a more rapid 6.5%.

Note: The opinions voiced in this material are for general information and are not intended to be specific advice. Any indices such as the S & P 500 can’t be invested into directly. Past performance is no assurance of a future result.
Because of regulation, comments have been turned off.