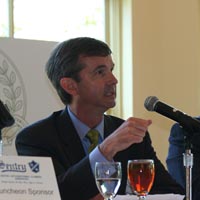 06/08/12: Almost like an uncontrollable allergic reaction rather than rational thought, the stock market reacted to spring with another sneeze. This year marks the third in a row where the S&P 500 experienced a greater-than-10% decline, a move often referred to as a “correction,” beginning in April. In the previous two years, the volatility and unease lasted into the summer months, and we believe that this is the case again this year.

The current challenges seem daunting enough to prompt individual investors to abandon stocks, as evidenced by relentless selling of domestic stock mutual funds and exchange-traded funds. Year-to-date, there has been more selling in 2012 than we experienced in the same timeframe in 2008, according to ICI data. In fact, we have seen selling in every one of the last 12 months—a new record for investor pessimism. But is this entirely justified? Is a market collapse inevitable?

A spectacular collapse always seems to have been just around the corner:

Present challenges should not be underestimated. However, when compared with the likely real threat of the current slate of problems, our anxiety seems disproportionately high—perhaps magnified by 24/7 news coverage. We have learned through past trying times that the worst-case scenario that feels so sure to happen is also a highly unlikely one. For example, contrary to common fears, the Cold War ended without nuclear annihilation, the 1960s counter-cultural radicals became Baby Boomers and bought BMWs, inflation was quickly tamed after the late 1970s and remains so, the world did not run out of oil in the 1980s, the emerging markets did not disappear and Japan did not come to own all of America by the end of the 1990s, and Y2K proved to be a non-event on January 1, 2000.

There is no shortage of current speculation and worst-case scenarios being discussed: Will the Eurozone fall apart? Will the United States fall off the fiscal cliff? Will the Chinese economy crash after running so fast for so long? Are we headed toward war with Iran? These questions do lead to anxiety and may not be definitively answered by the end of the year—or even the end of the decade. However, on the positive side, the U.S. economy is growing, albeit somewhat sluggishly, and so are corporate profits. Despite worries, consumers continue to spend with retail sales posting solid growth and housing prices finally rising once again nationwide. While confidence in policymakers is at a low, hopes will likely rise as the U.S. elections draw near.

In contrast to the latest crowd of pessimists who envision a spectacular collapse just around the corner, long experience and extensive financial market analysis suggests to me that though 2012 may be volatile, it is also unexceptional. Every age has its uncertainties; this age is not any different. When it comes to investing, success is measured by not only coping with uncertainties, but also viewing them as opportunities.

With both the uncertainties and opportunities, we are committed to making proactive decisions and communicating with you why certain moves need to take place due to the market climate at that time.

As always, if you have questions, I encourage you to contact me.

PS: You can hear an audio clip of me talking more about this subject on our home page as earlier this week I was a guest on The Matt Murphy Show on 100.5 FM WAPI. The audio clips are on the right side.

Note: The opinions voiced in this material are for general information only and are not intended to provide specific advice or recommendations for any individual. To determine which investment(s) may be appropriate for you, consult me prior to investing. All performance referenced is historical and is no guarantee of future results. All indices are unmanaged and cannot be invested into directly. The Standard & Poor’s 500 Index is a capitalization-weighted index of 500 stocks designed to measure performance of the broad domestic economy through changes in the aggregate market value of 500 stocks representing all major industries. The economic forecasts set forth in the presentation may not develop as predicted and there can be no guarantee that strategies promoted will be successful. * LPL Financial provided this range based on our earnings per share growth estimate for 2012, and a modest expansion in the price-to-earnings ratio. Please see our Outlook 2012 publication for further information. This research material has been prepared by LPL Financial.