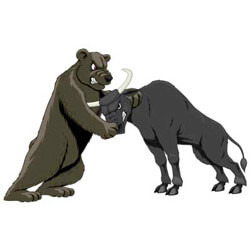 2/25/11: In the markets, as in life, there are no guarantees but everyone is entitled to their opinion. Here’s my opinion on the financial markets today.

The S&P 500 looks poised to end its three-day negative streak despite the fact that Gross Domestic Product (GDP) numbers for fourth quarter 2010 were revised downward.  Stable oil prices overnight and some encouraging corporate news are helping set a positive tone this morning.  Overseas markets are broadly higher, as Europe tries to end its five-day losing streak even though the UK economy contracted unexpectedly in the fourth quarter of 2010.  Commodities are broadly higher with U.S. crude futures inching up over $97, while copper and key agriculture commodities are up between 0.5% and 1.5%.  Spot gold and silver prices are higher, although near-term futures are down.

Looking back at Thursday, the major averages were “mixed” as a pause in oil’s unrelenting rise helped stem the selling tide.  Early losses for the S&P 500 of around 1% were erased during the latter part of the session as crude dropped about $6 intra-day on hopes of regime change in Libya.  The economically sensitive Technology, Industrials and Consumer Discretionary sectors led the turnaround, with help from some well-received earnings reports and dividend increases.  Economic data was mixed, with better-than-expected jobless claims, falling new home sales and an unexpected drop in core durable goods orders.  It probably “feels worse” because it’s been so long since the last pullback, but the S&P is down just 2.7% from its closing high one week ago on February 18th.

Our home state of Alabama suffered a “big miss” yesterday in the competition for supplying new Air Force refueling tankers. The Pentagon awarded Boeing Company a contract worth $30 billion for aerial refueling tankers over EADS North America.  Had EADS prevailed, the tanker production would have occurred at the former Brookley Air Force Base site just south of downtown Mobile.  In a written statement after the news broke, Alabama Senator Richard Shelby said that he was “disappointed but not surprised,” blaming Chicago politics for tipping the scales in Boeing’s favor, which is headquartered in that city.

This will be a fascinating year to watch state budget battles across the United States. To close budget gaps and rescue underfunded pension programs, most states are contemplating sweeping changes in how they fund their operations and compensate state workers.  The budget woes in most states result from a “cascade” of events largely triggered by the recession of 2007-2009.  There are four “key ingredients” working in concert in different states to varying degrees, but “globally” they are: (1) State revenues from taxes plummeted, (2) Pension obligations ballooned, (3) Prices of state purchases rose, and (4) Unemployment surged.  On average, state revenue has rebounded somewhat to 89% of peak levels.  Also on average, states’ liabilities equal 7.3% of their gross domestic product.

Manufacturing in the United States is far from dead, it’s just more efficient. In 2009, the most recent full year for which international data are available, American manufacturing output was $2.155 trillion (including mining and utilities).  That’s more than 45% higher than China’s, the country we’re supposedly losing ground to.  Despite recent gains in China and elsewhere, the U.S. still produced more than 20% of global manufacturing output in 2009.  The truth is that America still makes a lot of “stuff,” and we’re making more of it than ever before.  We’re merely able to do it with a fraction of the workers needed in the past.  Because of the efficiency dynamic, the average U.S. factory worker is responsible today for more than $180,000 of annual manufacturing output, triple the $60,000 in 1972.