2/14/11: In the markets, as in life, there are no guarantees but everyone is entitled to their opinion. Here’s my opinion on the financial markets today.

After last week’s gains, equities are slightly lower this morning.  Due to a lack of U.S. economic data today and earnings season starting to “wind down,” investors will be focusing their attention toward the Middle East, rising food prices, and the White House 2012 budget proposal.  The U.S. dollar is slightly higher this morning against most major currencies, while the majority of commodities are showing solid gains.  Overnight, equities in Asia posted strong gains on reports of a surge of imports and exports in China.  European equities are mixed this morning.

Looking back at Friday, stocks rallied mid-morning on the news that Egyptian President Mubarak stepped down.  An improving consumer confidence report and some good news on the earnings front also helped, sending all three major averages to new 52-week highs.  Financials topped Friday’s sector rankings with a 1.4% advance.  Meanwhile, Energy and Utilities underperformed on weaker crude and natural gas prices, as increasing optimism for stability in the Middle East lowered the risk premium in oil.

Around our financial planning firm this morning, we were discussing four major items that we thought would be of particular interest to our readers:

China has officially surpassed Japan as the world’s second largest economy after the United States, in dollar terms. Japan’s fourth quarter GDP decline of 0.6% (1.1% annualized), partially due to the expiration of various government subsidies on consumer goods that helped inflate demand in the previous quarter, firmly removed Japan from the number two spot.  This is no surprise, as Japan has been ceding ground to China for well over a decade. 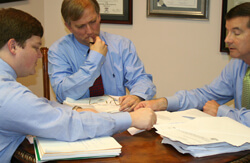 The turmoil and change in leadership in Egypt meant little for most stock, bond and commodity markets. However, Egypt provided an example of the unrest that can be fueled by rising food prices.  What seemed to be a world locked into one unified global business cycle a year ago is becoming more and more decoupled as each market classified by type, size, country and sector shows differing reactions to the return of inflation and the rise in interest rates.  Underlying all of this is that inflation will remain a key theme for all of 2011.

After a quiet week for data and policy last week, this week will be huge. President Obama releases his 2012 budget this morning and the Federal Reserve will publish the minutes of its latest FOMC meeting and its economic forecast in the middle of the week.  Data on manufacturing for January (industrial production) and February (Philadelphia Fed report and Empire State) is likely to continue to show strength, aside from weather impacts.  January data on consumer and producer inflation is likely to draw a great deal of attention given the recent flare-up in inflation concerns around the globe.  The January retail sales data is likely to show solid consumer demand, although it will be “weather influenced” by the bitter winter in January.

Long-term Treasury yields fell 6 basis points on Friday despite a rally in equity markets over developments in Egypt. This morning, Treasury yields are largely unchanged with no economic data being reported.  Inflation reports due later in the week will be closely watched by bond market participants, who have already begun to “price in” an increase in inflation as reflected in TIPS valuations.  In a Wall Street Journal interview over the weekend, noted “inflation hawk” Philadelphia Fed President Plosser discussed possible actions the Fed could take to remove stimulus, including: (1) stopping Quantitative Easing  2, (2) stop reinvesting principal paydowns from mortgage-backed securities, and (3) raising rates on excess reserves.