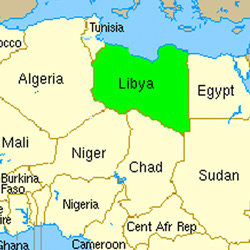 2/22/11: In the markets, as in life, there are no guarantees but everyone is entitled to their opinion. Here’s my opinion on the financial markets today.

This morning I am reminded of the Beatles song, “Revolution” as U.S. stock investors returned from the three-day weekend to see crude more than $6 higher (back to highs for the year) as violence in oil-rich Libya prompted fears of disruption to oil supplies.  Concerns that unrest will spread to other oil-producing nations and that skyrocketing oil prices will curb economic growth are weighing on equities globally.  Mideast tension is offsetting well-received results and an upbeat outlook from a large national retailer.  European and Asian markets were lower on Mideast concerns and higher oil prices, with Japan’s Nikkei lower for the first time in seven sessions.  Precious metals are attracting safe-haven bids despite a higher dollar, led by silver’s 3% jump, while growth concerns are weighing on copper and key agriculture commodities.

Looking back at the Friday pre-holiday results, broad averages finished another good week on a high note.  Stocks rose again Friday, capping off another solid week in which the S&P 500 gained 1%.  With only one week left in February, the broad averages have only had three down days so far this month.  News of another China rate hike, ongoing Mideast tensions and even renewed European sovereign debt concerns kept gains modest but were not enough to prevent another positive session (today, of course, is a different story).  Energy topped the sector rankings with a 0.6% advance on higher crude prices, while Materials suffered a 1% loss on concerns of a more dramatic slowdown in China.

Around our financial planning firm offices this morning, we were discussing four items that we thought would be of particular interest to our readers:

Given the escalating unrest in Libya and the rest of the Middle East, this week’s economic data is likely to be of only secondary concern to markets. Against the backdrop of an improving domestic economy, financial market participants this week will be paying close attention to the political unrest still unfolding in the Middle East and its potential impact on global energy prices, global growth and inflation.  With the earnings reporting season largely completed in the United States, no major central bank meetings on tap and a quiet week for Chinese economic data, reports in the United States on manufacturing and housing were poised to be “front and center” before Middle East events intruded.

A $3.7 billion Illinois taxable GO deal will test the municipal bond market this week. The deal was supposed to price last week but was delayed so market participants could review the governor’s budget proposal.  Municipal valuations improved last week despite the 14th consecutive week of withdrawals from muni mutual funds.  The amount of $974 million was the lowest since the week ending December 8th.

Treasury yields are lower this morning on a flight-to-quality bid over tensions in Libya. Treasury yields declined by 9 basis points (bps) last week at the short-intermediate part of the curve but remained stable at the long end as the curve flattened.  Inflation expectations rose by 10 bps on dovish FOMC meeting minutes and higher-than-expected CPI data.  Fed funds futures markets show “pared back” expectations (40%) for the first rate hike by the end of the year.

On positive earnings results, investment-grade corporate spreads tightened 4 basis points last week to +139 over Treasuries. Fund flows turned negative recently as retail investors “rotate” into equities.  However, retail investors only hold about 30% of outstanding corporate bonds versus 70% of municipal bonds, so outflows don’t weigh quite as heavily on the sector.  By comparison, high-yield spreads tightened by 4 bps last week to +492 over Treasuries.  High-yield continues to perform well as rates rise and has provided a better hedge against rising rates than TIPS.