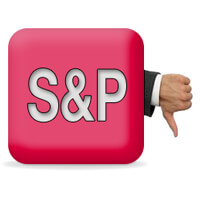 April 18, 2011: In the markets, as in life, there are no guarantees but everyone is entitled to their opinion. Here’s my opinion on the financial markets today.

Futures were already down several points this morning following an increase in China’s reserve requirements and the market’s ongoing focus on Europe’s debt woes as Greece default concerns intensify.  Stocks then took another leg down after the news broke that S&P revised its outlook for U.S. sovereign debt to negative.  The market appeared to take the China news mostly in stride as further tightening has been expected, although commodities are under some pressure this morning.  The earnings news looks relatively good, although the focus on the U.S. budget situation will drown it out.  European markets are lower in mid-day trading overseas on growing sovereign debt concerns and some spillover from the U.S. sell-off, while Asian markets closed mostly lower by between one half and one percent.  U.S. crude is down more than a dollar to $108, erasing Friday’s gains after the Saudis characterized the market as oversupplied.

Looking back at Friday, stocks managed a modest gain as economic data outweighed earnings.  Stocks edged higher Friday despite earnings-driven declines by a major technology company and a significant bank.  A subdued consumer inflation reading, solid New York manufacturing survey, better-than-expected industrial production data and improved consumer confidence helped push stocks higher despite Chinese inflation concerns and an Irish debt downgrade.  Tech lost about a half percent on the day, while the rest of the S&P sectors managed to advance led by Utilities, Health Care and Energy.  The S&P lost 0.6% last week but is still up over 5% on the year.