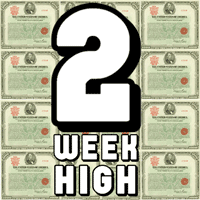 5/19/11: In the markets, as in life, there are no guarantees but everyone is entitled to their opinion. Here’s my opinion on the financial markets today.

A sizable drop in initial jobless claims and gains overseas contributed to a strong open for the U.S. market this morning.  Overseas markets are moving higher on strength in resources, but are leaving the Nikkei behind.  Japan reported that the devastating natural disasters in March have driven the Japanese economy into recession.  Ongoing Greece concerns are weighing on the euro and propping up the U.S. dollar index, but not enough to prevent most stock markets around the world from rallying.  Oil and most key metals are slightly lower this morning, while grain prices are up strongly again on delayed plantings in the U.S. and abroad.

Looking back at Wednesday, rebounding commodity stocks helped the broad averages break out of their mini-slump yesterday.  Gains overseas and earnings were, for the most part, supportive, as was the afternoon release of the FOMC minutes.  Overall, it was the commodity rebound that carried the day and led the S&P 500 to its first gain in four sessions.  Oil jumped more than 3% back over the $100 threshold on a bullish inventory report, which along with strong gains in copper and grains boosted the CRB Commodity Index by more than 2%.  Higher commodity prices propelled Energy and Materials, each up about 2%, to the top of sector rankings, as cyclicals reasserted themselves and staved off another session of defensive leadership.

Initial claims for unemployment insurance move lower in the latest week, but are still subject to distortion. 409,000 people filed claims for unemployment insurance in the week ending May 14th, approximately 29,000 fewer than in the prior week and 70,000 fewer than the recent peak in claims (478,000) hit on April 30th.  Claims are always volatile, which is why most market participants look at claims on a four-week moving average basis.  Over the past four weeks, an average of 439,000 claims were filed each week.  The recent low in the four-week average on claims came in mid-March (just prior to the earthquake in Japan) at 388,000.  It appears that most of the 50,000 increase in claims since then is “noise,” not a “signal,” as the earthquake, severe winter weather in March, the late Easter, tornados, and now flooding are distorting the data.  An even bigger distortion is on its way, as the nation’s auto plants embark on their annual summer shutdowns, always a source of volatility in the claims data.  We will continue to monitor claims, which is a crucial piece of “real time” information on the economy.

Jobless claims data is pushing Treasury yields higher with the benchmark 10-year note up another 5 bps to its highest level in two weeks. The Treasury will auction $11 billion of 10-year TIPS today and also announce sizes of next week’s 2-, 5-, and 7-year note auctions.  Inflation expectations have declined sharply in recent weeks, meaning TIPS valuations have declined relative to nominal Treasuries.

Treasuries sold off yesterday as risk aversion abated, sending yields higher by 5 basis points (bps) across the intermediate to long-end of the curve. The FOMC minutes revealed that a majority of participants favored hikes in short-term interest rates to precede asset sales from the Fed’s balance sheet.  As a first step, the balance sheet would passively shrink by discontinuing the reinvestment of maturities and paydowns of agency securities.  Sales of securities would proceed at a gradual pace and the portfolio would eventually return to holdings of Treasuries only.

U.S. dollar intervention appears to have been large in April, setting the dollar up for the temporary rebound experienced in May. Most countries have now reported their official foreign exchange reserves for April.  The last time we saw this size of an intervention, it was in the fall of last year and led the November 2010 dollar bounce.  Not coincidentally, the dollar is up about 3% in May, the same appreciation as in the two weeks after the announcement of QE2 when intervention last took place.  Dollar rallies based on intervention tend to be short-lived.  The rebound in commodities and the end of the dollar run may have already started.