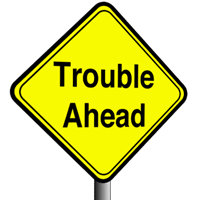 6/03/11: In the markets, as in life, there are no guarantees but everyone is entitled to their opinion. Here’s my opinion on the financial markets today.

The weak May jobs report, including a slight increase in the unemployment rate, drove stocks down more than 1% in early trading this morning.  The report adds to the plethora of recent evidence suggesting that the pace of the economic recovery slowed meaningfully in May.  International markets are broadly lower on growth concerns emanating out of the U.S.  Meanwhile, speculation that another rate hike was forthcoming from China’s central bank is adding to the market’s cautious tone.  Growth fears and the Treasury rally are pushing gold higher this morning, while economically sensitive energy and metals are broadly lower.  Supply fears are propping up agriculture prices, which are mostly flat or higher despite the global selloff in risk assets.

Looking back at Thursday, the market session was decidedly choppy.  The Nasdaq managed a modest gain Thursday as the Technology sector rose slightly, while the Dow and S&P 500 fell modestly in a mixed session.  May sales from retailers largely missed expectations, failing to help calm market jitters that have arisen in recent weeks amid a string of disappointing economic data and ongoing Greek default concerns.  Industrials topped the sector rankings as a major mining equipment maker provided a strong outlook, while Consumer Staples fell most on broad based weakness.  Crude was flat as a weak dollar offset a bearish inventory report, while the start of hurricane season and a bullish inventory report drove natural gas prices higher.