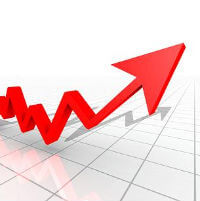 4/5/11: In the markets, as in life, there are no guarantees but everyone is entitled to their opinion. Here’s my opinion on the financial markets today.

Today was set up to be another slow news day for the markets with just the FOMC minutes and the ISM Services report on the calendar.  However, things have quickly spiced up with another rate hike from China’s central bank and the announcement of a major Tech sector merger with a chip production focus.  Commodities are under modest selling pressure this morning on the China news, while semiconductor stocks are rallying on the chip deal despite ongoing concerns about the supply chain disruptions in Japan.  European stocks were lower after Moody’s downgraded Portugal’s debt rating, while Asian stocks sold off in response to China’s tightening move as well as the ongoing Japanese nuclear challenge.

Looking back at Monday, stocks moved little on the lightest volume day of the year as the broad averages stand near February highs.  There was little in the way of news overseas, leaving markets to digest Friday’s U.S. data and look ahead to the happenings in Washington this week.  Materials topped the sector ranking while the biggest decliner, Technology, was again weighed down by weakness in chipmakers and PC-related stocks on Japan concerns.  Crude was up about 50 cents to a fresh two-year high closing price.

Yes, it’s good to have mergers back, particularly among mid cap stocks. A pickup in M&A seen in Tech, Health Care and Materials tends to coincide with a pickup in hiring also witnessed in the past couple of months.  We are noticing that a large number of deals are making use of cash rather than credit for financing. Why is that significant? It can cause shares to surge.  Also, it suggests that the trend may continue to support mid cap merger activity (and their stocks) even as rates rise.  In yesterday’s announced Technology deal, for example, shares of the company being acquired raised 73% in after-hours trading.

More on the Chinese interest rate hikes. The Peoples Bank of China raised its overnight lending rate by 25 basis points early this morning, the fourth rate hike in this cycle.  Chinese markets were closed Tuesday for a holiday, and the hike occurred after most emerging market exchanges were closed for the day.  After struggling in 2010 to get a handle on the extent and timing of policy tightening in China, financial markets can now see the light at the end of the tunnel, and have generally coalesced around a view that China will hike rates a few more times before mid-year as it grapples with rising inflation.  This is being done to slow down the Chinese economy.  As a result, mutual funds heavily invested in china may suffer.

The coming week holds few catalysts for bonds. Economic data is limited and no significant auctions are scheduled.  Investors may wait for the following week when the next round of inflation data is released and 3-,10-, and 30-year bond auctions are held.  For the coming week, attention will fall on a steady dose of Fed speakers and Thursday’s ECB meeting where the ECB is widely expected to produce its first 0.25% interest rate hike.

Volatility is another theme that may repeat in coming quarters. Although Treasury yields increased over the quarter, safe-haven buying produced a notable rally intra-quarter causing the 10-year Treasury yield to fall from a high of 3.75% to 3.20% before finishing the quarter 0.17% higher at 3.47%.  Given lingering uncertainties from the Japan earthquake, Middle East turmoil, and European debt problems, bouts of safe-haven buying will likely characterize the bond market going forward and help keep the rise in bond yields gradual.