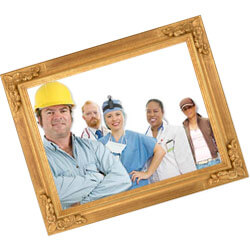 3/04/11: In the markets, as in life, there are no guarantees but everyone is entitled to their opinion. Here’s my opinion on the financial markets today.

U.S. stocks opened near unchanged this morning after a solid 192,000 jobs were added in February and the unemployment rate inched lower.  The report drove a bit of relief rally in equities immediately after its release, but renewed focus on Libya and a jump in oil prices dampened the bulls’ enthusiasm.  European markets are trading higher this morning although continued strength in the euro following ECB head Trichet’s hawkish comments yesterday is a challenge for European exporters.  Key Asian markets closed higher, with gains north of 1% for both the Nikkei and Hang Seng.  Crude is higher as ongoing battles in Libya continue to put the country’s oil production at risk while Saudi Arabian concerns linger.

Looking back at Thursday, stocks rallied nearly 2% Thursday as crude fell – though only slightly – on reports of peace talks in Libya, along with sharply lower jobless claims, a strong ISM services report and better-than-expected February sales from retailers.  A strong euro and weaker dollar after the ECB signaled an impending rate hike helped support economically sensitive commodities, while precious metals sold off as some unwound safe-haven trades to rotate into riskier assets.  Industrials (+2.4%) topped the sector rankings, while Financials, Materials and Health Care each gained 2% or more.  Elsewhere on the commodities front, agriculture commodities finished broadly higher, with wheat, corn and soybeans each up between one and two percent.

What sectors does the current improving jobs picture support? Obviously, Consumer Discretionary benefits as consumer confidence improves and more folks get paychecks.  Two that you might not have thought of are: (1) REITS and (2) Technology.  An improving jobs outlook places more working, device-toting people “filling seats” in offices.

And speaking of which, the labor market continued to improve in February. The private sector added 222,000 jobs in February, a “snapback” from the meager 68,000 jobs added in January.  Severe winter weather had a big impact on the job count in January, and markets are likely to average the payroll job count in January and February to get a better sense of the underlying health of the labor market.  At 145,000, the average job gain in the first two months of 2011 is an improvement over where we were six months ago, but is probably not yet robust enough to convince the Fed that the labor market is completely healed.  There were solid job gains in manufacturing, construction, transportation and leisure.  State and local governments shed another 30,000 jobs in February and have lost 400,000 since the end of the recession.

Also on employment, we thought that you would be interested to know that the jobs report is made up of two surveys: (1) the establishment survey and (2) the household survey.  The establishment survey generates the payroll job count data mentioned above, while the household survey produces the unemployment rate.  The unemployment rate is calculated by dividing the number of unemployed persons by the total number of people in the labor force.  In February, the number of unemployed persons fell by 190,000 to 13.7 million and has declined by 1.4 million in the past three months.  This is consistent with the drop in initial filings for unemployment benefits over the past three months.  The labor force increased by 60,000 in February to 153.2 million, so the unemployment rate (13.7 million/153.2 million) fell from 9% in January to 8.9% in February.

Finally, how is the job report looking today versus the “rough patch” of the past couple of years? While gross domestic product (GDP), consumer spending and the stock market are at or near new all-time highs, job growth has lagged.  The U.S. economy lost 8.75 million jobs during the downturn and has only gained 1.25 million back since then.  But, today’s nonfarm payroll report was the biggest number yet for this recovery when adjusted for the census hiring that bloated the numbers in the first half of 2010.  Stocks have been anticipating the return of job growth.  Oil prices are up this morning, which has been a negative for the stock market, so the resilience in stock futures, which are basically unchanged as they hang on to yesterday’s strong gain, is a sign of strength and a result of this job report delivering on expectations.