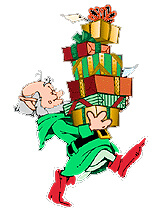 In the markets, as in life, there are no guarantees but everyone is entitled to their opinion. Here’s my opinion on the financial markets today.

With two weeks to go until Christmas, the elves involved in “supply chain management” at the North Pole don’t have much on the folks that are charged with releasing economic data this week that will drive the markets.  Although no United States economic reports are due out today, the rest of the week is extremely busy for such releases.  Manufacturing sector reports for December come out along with November retail sales and leading economic indicators.  As we informed you last week, the expectation is that 85% of this week’s economic reports are expected to show acceleration from the prior month.

Here are four major items that we were discussing in the office this morning and that we are following closely for our readers:

Last week, stocks reached new post-recession highs. Investor surveys that are coming out at the moment are showing the most bullish level in four years.  Along with the economic data releases just mentioned, a narrowing trade deficit and improving consumer confidence are helping.  A dividend increase from General Electric, its second this year, also helped market sentiments.  U.S. stocks opened higher after the S&P eclipsed its highest level since Lehman Brothers collapsed in 2008.

The Federal Reserve Open Market Committee (FOMC) meets this week for the last time in 2010. The Fed is not expected to change policy or alter the course of Quantitative Easing (QE)2.  Many forecasters do not see any rate increases until November of 2011.  Futures markets this morning are similarly “lining up” with this sentiment, setting a 50% probability of a rate hike by the November FOMC meeting.

Treasury yields have continued to move higher. This was “spurned on” by Friday’s positive economic data and the equity market rally.  The New York Fed on Friday announced its tentative purchase schedule for Treasury securities over the next month as part of QE2.  The quantity remains the same as last month, at $105 billion, though Chairman Bernanke has left open the possibility of additional purchases.

The Chinese have decided not to raise interest rates despite higher inflation. This action helped overseas markets, the U.S. markets and commodities.  European markets were also higher on strength in mining stocks as copper hit a record high.

As always, email me here with questions or comments.  I love to hear from you and thoroughly enjoy the “intellectual debate” with our clients and friends that these opinions generate.