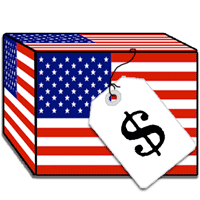 5/9/11: In the markets, as in life, there are no guarantees but everyone is entitled to their opinion. Here’s my opinion on the financial markets today.

U.S. stocks opened flat this morning while commodities, after last week’s selloff, are staging a solid recovery.  Earnings reports are unlikely to provide a catalyst for stocks – in either direction – with roughly 90% of the reports in the books.  As such, macro news will garner much of investors’ attention this week, including inflation data, retail sales, and the ongoing budget battle in Washington.  Overseas markets are mostly lower with European stocks down on lingering sovereign debt concerns while the nuclear crisis continues to weigh on the Nikkei.  Bucking the trend is the Hang Seng, which closed nearly 1% higher.  Led by last week’s biggest losers, namely silver and oil, commodities are solidly higher this morning.  Oil is making a run at returning to the century mark while gold is back over $1500.

Looking back at Friday, stocks gained some ground after a better-than-expected monthly jobs report, with well over 200,000 jobs added in March.  An early rally faded later in the session on renewed Greece sovereign debt concerns and seemingly unfounded speculations that the country was looking to exit the euro zone.  In terms of sectors, oil prices continued their slide, boosting Industrials by nearly 1%, but limiting the Energy sector’s advance.  Lower energy prices did not help retailers, which fell about a half percent and caused Consumer Discretionary to end the session flat.  A weak euro propped up the dollar, which gained nearly 3% last week.  For last week in total, the resource sectors dragged the S&P down by 1.7%, but the index is still up over 7% for the year.  Commodities sold off sharply across the board, led by silver and oil, which lost about 27% and 14%, respectively.